De-icing Roads with Products Made from Milk 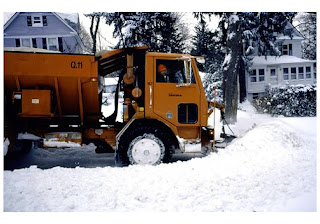 Road Safety
A look at the alternatives to rock salt for de-icing roads (article)
In Wisconsin, the dairy heartland of the U.S., some cities are using a by-product of cheese production to de-ice roads: cheese brine. According to NPR, tens of thousands of gallons of liquid brine are used each year, along with rock salt, to help the salt stick to roads and melt the ice faster.

Road Safety
The Secret to Snow Removal Is Pickle Juice and Cheese Brine (article)
Washington DC uses beet juice. So does New Jersey. In the past, the Garden State also used pickle juice. Argentina uses wine byproducts. And when the meteorologist predicts snow in Wisconsin, Polk County sprays the roads with cheese brine. “The dairy gives us that for free, and we will go through 30,000 to 65,000 gallons a year,” says Moe Norby, technical support director for Polk County’s highway department.

Road Safety
Cheese To The Rescue: Surprising Spray Melts Road Ice (article)
This winter, a Wisconsin county is fighting icy roads with a homegrown product: liquid cheese brine. Tens of thousands of gallons of the stuff are used each year along with road salt, according to officials in Polk County.

Road Safety
Pouring Cheese on Icy Roads in (Where Else?) Wisconsin (article)
This month, Milwaukee began a pilot program to repurpose cheese brine for use in keeping city roads from freezing, mixing the dairy waste with traditional rock salt as a way to trim costs and ease pollution.

Road Safety
Screw Salt, Wisconsin Is De-Icing Its Roads With Cheese Brine
Life handed Wisconsin lemons, and Wisconsin has come right back with the cheesiest lemonade you ever did see. Instead of spending thousands of dollars to dispose of cheese brine every year, Wisconsin will be putting that liquid provolone gold right back to use by pouring it onto the roads—which, in turn, is making them safer than ever before.