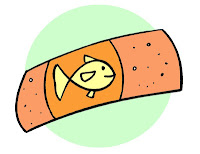 Using the natural glue that marine mussels use to stick to rocks, and a slightly modified inkjet printer, a team of researchers from North Carolina State University in the US has devised a new way of making medical adhesives that could replace traditional sutures and result in faster healing, less scarring and increased precision for exacting operations such as eye surgery. Thanks "C" for sending me the above link

Celox
Flakes of Crab and Shrimp Shells Provide a New and Effective Way of Clotting Arterial Bleeds (article)
Celox is easy to use — you just pour it on an open wound and apply pressure — and both safer and faster-acting than similar products. The best bit, though, is that the active ingredient, chitosan, is extracted from the shells of crabs and shrimp.

First Aid
Celox
"CELOX is made of chitosan, a compound derived from shrimp shells. Chitosan has proven antimicrobial properties and is not a procoagulant. Chitosan is broken down and absorbed through normal metabolic pathways and has an extensive history of use in vascular closure and in human cardiac surgery. CELOX has a three year history of use in emergency, military, and retail first aid with no reported incidents.

First Aid
Hem Com Bandages
FAQ page: "From what is the HemCon Bandage comprised? The HemCon Bandage is fabricated from chitosan, a naturally occurring, biocompatible polysaccharide derived from shrimp shells. The shrimp shells are processed and chemically treated. Once in bandage form, they are sterilized.

Is there a problem using this product on people with shrimp or shellfish allergies?

There have been no known allergic reactions as a result of using the HemCon Bandage since distribution began in 2003 and there have been no adverse effects reported in over 700,000 bandages shipped. HemCon, Inc. has results from a shellfish allergy study conducted by its chitosan supplier which demonstrates that, out of 221 individuals with suspected hypersensitivity, including 8 individuals with known shellfish allergies, none demonstrated any dermal sensitivity when pricked with a chitosan test solution. However, since chitosan is extracted from the shells of shrimp and other shellfish, individuals with known shellfish allergies should exercise caution in the use of products containing chitosan.

From Avoiding milk Protein.com
Non Food Items That Contain Shellfish, Fish and Other Ocean Life
at 10:44 AM

Email ThisBlogThis!Share to TwitterShare to FacebookShare to Pinterest
Labels: Allergens in Drugs and Other Treatments, Fish Allergy, Shellfish Allergy